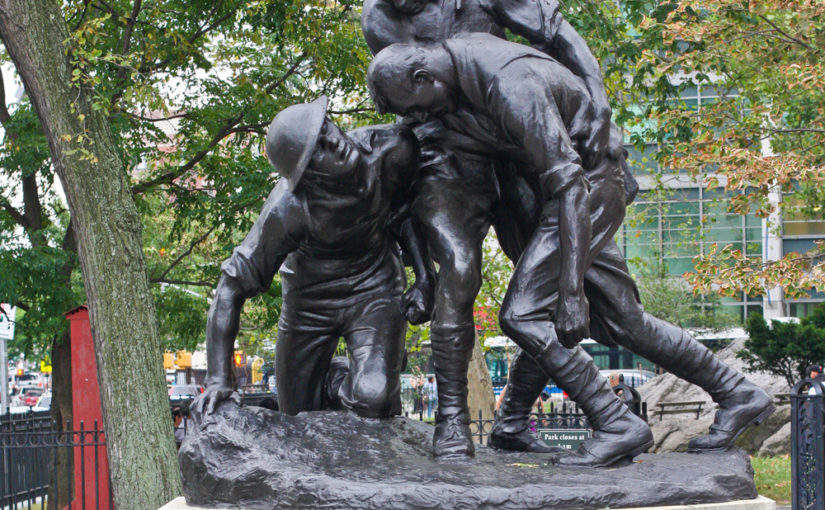 A ceremony and remarks will be held in Mitchel Park to unveil the restored Washington Heights and Inwood War Memorial on November 7. This monument of three Doughboys was damaged by vandals and has been restored. There are memorial plaques that list the 357 local casualties; the majority are from New York soldiers of the 26th, 27th, 42nd, and 77th divisions. The ceremonies are hosted by NYC Parks and we are invited guests.

East Coast Doughboys will wear uniforms with helmets, cartridge belts, canteens, first-aid pouch, SBR bag, rifles if you have them. Overcoats are authorized. We will rally at 9:00 and the ceremony begins at 9:30 and lasts approximately 35 minutes.

About the Washington Heights and Inwood War Memorial (From World War I New York: A Guide to the City’s Enduring Ties to the Great War):

Sculptor Gertrude Vanderbilt Whitney created this heroic memorial where Broadway and St. Nicholas Avenue converge at West 167th Street. Whitney (1875-1942) was born into tremendous wealth as the great-granddaughter of transportation tycoon Cornelius Vanderbilt. Trained as an artist and sculptor, she used her status to promote the arts, and at 21 she married the banker Harry Payne Whitney. Invariably, press accounts of the era referred to her as “Mrs. H.P. Whitney” even as she founded the gallery and museum that bears her name today.

During the war Whitney went to France and used her fantastic wealth to support the American Ambulance Hospital, later the American Red Cross Hospital No. 6, in the village of Juilly. Whitney gave funds for electricity, plumbing, and surgeons from the United States for the 200-bed hospital. In France she made drawings and sketches of battlefield tableaus. These became sculptures that she exhibited in 1919 at her studio in Greenwich Village at the same time she collaborated on the Arch of Victory on Broadway.

Out of this work came her designs for the Washington Heights and Inwood Memorial Association. The bronze sculpture was completed in just ten months. Her battlefield scene of three Doughboys trying to help each other in the heat of battle is a realistic depiction of men at war. Two are wounded and lost their steel helmets and are bareheaded; their puttees are askew. Only one has his rifle, with fixed bayonet, slung over his shoulder. The composition has stability and Whitney’s naturalistic style, combined with the trio forming a pyramid shape, enhances the gestures of the group. The architectural firm of Delano and Aldrich, who designed the circular granite pedestal, set twenty bronze star-shaped plaques listing the 357 local casualties. Inverted torches separate the war dead tablets around the elegant base. The torch is traditionally a symbol of life, but when inverted it symbolizes death. The memorial was dedicated on Memorial Day, May 30, 1922.

The park was named to honor Mayor John Purroy Mitchel, and a memorial flagstaff was added in 1941. In 1998 the monument received a cleaning and restoration, with a replica of the long-lost bayonet created. It was promptly stolen again and has been restored.